Innerzyme offers an optimum quality, all natural form of Vitamin K2, MK-7 (as menaquinone-7) from Non-GMO fermented soybeans.  Research indicates Vitamin K2, MK-7 may have a positive impact on cardiovascular, bone and soft tissue health. Also, it is the role of Vitamin K2 to ensure calcium is properly deposited into bones and removed from the arteries. Vitamin K2 deficiency is on the rise and linked to many age-related health conditions. 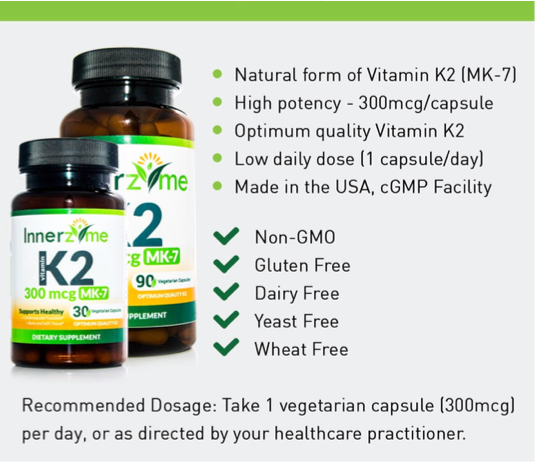 Take 1 vegetarian capsule (300mcg) per day, or as directed by your healthcare practitioner.*

In healthy individuals, research has not reported any side effects, adverse reactions or known toxicity as a result of large doses of Vitamin K2. However, individuals on anticoagulants such as warfarin should consult their healthcare professional before adding a Vitamin K2 supplement to their daily regimen.

If you have a health condition, are pregnant, nursing, lactating, trying to become pregnant or taking any medications (especially anticoagulants), consult your healthcare practitioner before using this product.

Keep out of reach of children.

What is the difference between Vitamin K2, MK-4 and MK-7?

Although many people in Eastern cultures consume fermented soybeans, the slimy and smelly taste and texture of them often make it too harsh and unpleasant to consume. As a result, getting an adequate amount of MK-7 is easier and more convenient with supplementation of Innerzyme’s Vitamin K2, MK-7. 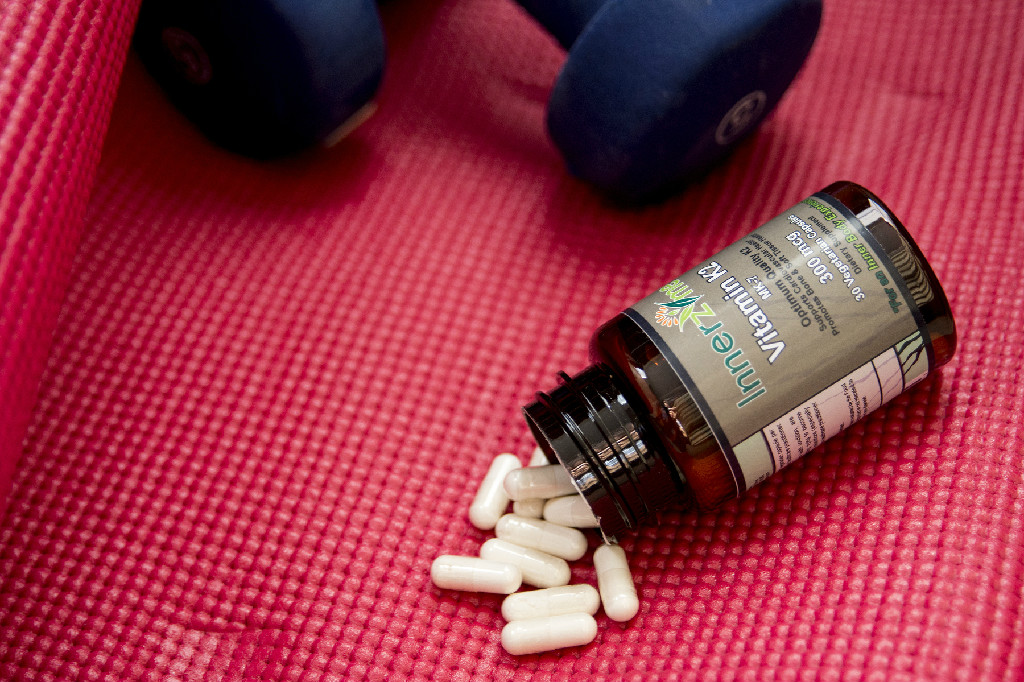 A study was conducted on healthy postmenopausal women to determine whether or not taking a dietary supplement of Vitamin K2 in the natural form of MK-7 could have a positive effect on bone health including strength and BMD (Bone Mineral Density). The results indicated, “MK-7 intake significantly improved vitamin K status and decreased age-related decline in BMC and BMD at the lumbar spine and femoral neck, but not a the total hip. Bone strength was also favorably affected by MK-7. MK-7 significantly decreased the loss in vertebral height of the lower thoracic region at the mid-site of the vertebrae” (1).

*These statements have not been evaluated by the Food and Drug Administration. This product and information is not intended to diagnose, treat, imply, cure or prevent any disease.